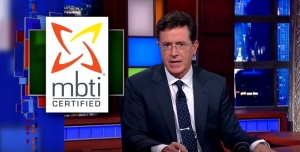 Last Monday September 28th, the MBTI® instrument made its first appearance on late night TV thanks to Late Show host, Stephen Colbert! As an installment of Colbert’s journey towards discovering “Who am Me?”, the prolific funnyman decided to utilize what he described as the most ‘definitive personality assessment of them all’. Sitting down with a Master Practitioner and all the while injecting his one-of-a-kind humour, Stephen explores his personality through the introduction of preferences, with INFP being his final result. Now, whether or not this is the ‘ideal type for a male demographic aged 18-35’ – which Colbert sought clarity on for obvious reasons – the Master Practitioner makes it clear that all personality types are equally valuable and ultimately, authenticity and acceptance win the day.

Aside from the sheer thrill of seeing the MBTI instrument on TV (I think this would appeal to any and all type fans such as myself), and despite his erroneous assumption that the MBTI prescribes career (which we know is not the case), it’s important to acknowledge the exciting implications of such a cameo. Despite being over 70 years old, The MBTI assessment is as valuable, reputable and relevant as it ever has been; the fact that Stephen Colbert chose to feature it, rather than any other, speaks to this important idea, and helps further elevate the instrument as the gold standard it continues to be. As a community of practitioners, it is exciting to see that the applicability of the instrument we know and love is not diminishing with time, but in fact, is exponentially increasing with exposure and appropriate use.

In a twist of fate, the day after the episode aired, I delivered a talk for the CPP MBTI User’s Conference around the importance of MBTI advocacy, highlighting its utility and ongoing relevance (See related blog post here). Indeed, the tool continues thrive through its relevance and ability to transform and help those who experience it. It’s nice to know someone like Stephen Colbert is helping perpetuate that legacy.

View the Late Show segment “Who is Stephen Colbert?” here: