Using Type to Influence and Impact

Using Type to Influence and Impact

How does MBTI Type affect our ability to communicate with and influence others?

Research by Damian Killen’s company thrive and CPP (the U.S publishers of the Myers-Briggs Type Indicator) was presented at the MBTI® User’s Conference in San Francisco last year. While we’ve always known that type heavily influences how we communicate – and how we prefer to be communicated with – Killen’s research explored the art of influence and buy-in specifically. This new research demonstrated that the two middle letters of our four-letter MBTI Type (known as the functional pairs Sensing/iNtuition, Thinking/Feeling) are the key to how you are likely to influence others, and how you prefer to be influenced in return.

In the graph below, you will see a pictoral representation of the ‘deal breakers’ and the ‘unimportant’ (left axis of graph, represented by + and – numbers) components of influence, as indicated by each function pair. You will notice that different characteristics of an interaction are more or less important by group. For example, while rapport is a very big deal in influencing NF, it is far less important to the other three groups. Notice how “trust” is crucially important to ST and SF, but minimally important to NTs, who value understanding over every other component. 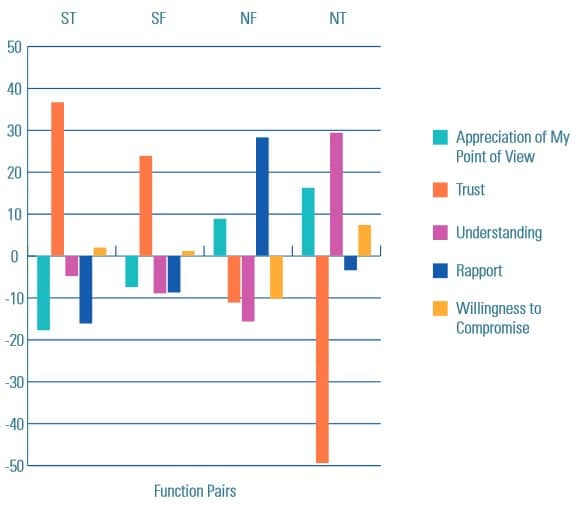 The implications of research like this include the need to acknowledge our own tendencies or ‘sticking points’ of influence, and be able and willing to flex beyond those habits when we influence others. If we default to only our style, the results may be less than what we hope, or expect, from our interactions. In the absence of knowing another individual’s type, these findings also act as a reminder to include as many of these elements as we can within our dialogue. Only then can we maximize the chance of ensuring maximum impact – and influence.

Click here for the full CPP Type and Influence Report.

Are Leaders Too Rigid?

Has COVID-19 changed our approach to conflict?